Yesterday, your Chicago Tribune reported that between 2000 and 2005, 3,282 complaints about animal welfare licensees -- pet stores, shelters, kennels and municipal animal control centers -- were filed with the Bureau of Animal Welfare. 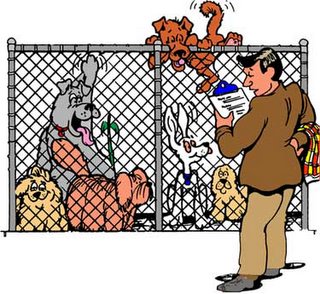 But when Animal Welfare needs to punish a licensee who is out of compliance with state law, regardless of the seriousness of the infraction, they only had two options: 1) revoke the license or 2) suspend the license. So the only punishment available to the Bureau is shutting down the facility -- the licensing equivalent of the death penalty.

As a result, neither option is even considered except in the most egregeous cases and as a result only three of the 3,282 cases (.09%) went to revocation or suspension hearings.

And no licenses were revoked or suspended.

[Bellock] is sponsoring a bill that would give the Department of Agriculture disciplinary options less severe than closing down a facility but strong enough to prompt compliance.

Under the legislation, the department could fine licensees $200 for their first violation, $500 for a second violation within three years and $1,000 for a third violation and mandatory probation.

Bellock said she wrote the legislation after consulting the Department of Agriculture. Squibb said the department has not taken a formal position on the legislation, but said it was "viewed favorably."

"The more tools we have to do our job, the better," he said.

Congratulations to Rep. Bellcock for sponsoring what appears to be some fine, common sense legislation.
Posted by So-Called Austin Mayor at 10:48 AM